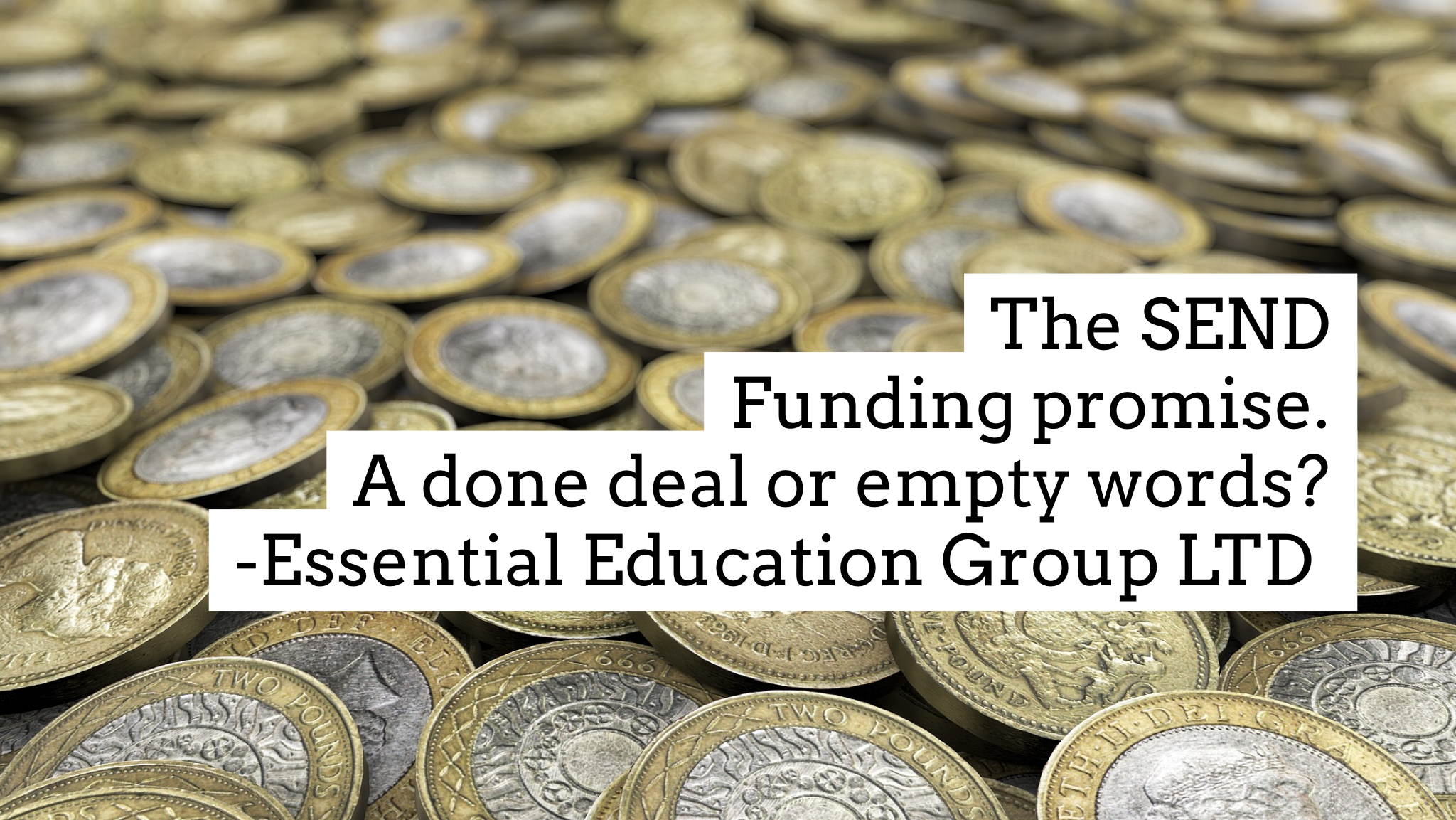 Great! More SEND funding (But is it really all great news?)

On September 4th the Chancellor of the Exchequer Sajid Javid announced the 2019 Spending Review. In it, Javid confirmed the already-warm news of an extra £700m for SEND in schools.

Yet, as the tumult in Westminster continues, just how sure of this funding can we be? Following numerous failed promises, a healthy degree of skepticism is to be warranted by those working in the field.

As the age of austerity is now apparently over, we should be thankful for an injection of funds into SEND. The impact of austerity on SEND has left many local authorities with eye-watering deficits.

Help seems to be on the way, but, pause again, because these funds are not coming now, in this school year. They will be arriving next year, in 2019-20, for vulnerable youths, parents, teachers.

So, what does this mean? Well, in my humble opinion, SEND workers, I respectfully warn you that austerity is not yet over.

An independent review by the Local Government Association outlined a £1.6 billion funding gap in SEND.

Indeed, after a decade of severe cuts, the renewed funding amounts to little more than a drop in the ocean, both in terms of capital and in skills. Impacting quality SEND care is not something which translates directly from a spreadsheet of spending.

We’ve faced a decade where we have lost the opportunity to train and develop the people who do the work with those in need. Experience does not come as quickly as a bank transaction.

Digging deeper into the funding only brings more headaches, as this Spending Review covers two years, 2019-20, and 2020-21.

However, SEND funding in the Spending Review is only accounted for in 2019-20. We do not yet know whether this funding is a one-off payment or part of a wider plan.

Given the precarious nature of politics, it seems hard to pin any hard and fast hopes to these figures.

The wording of the Spending Review implies that this £700m will be only for the High Needs Block.

Furthermore, the ‘giant cash boost’ described in August’s press release suggests funding is to be used for running costs, rather than increasing the amount of new facilities and the number of SEND workers.

With many SEND pupils in mainstream schools, we also don’t know how the extra £7.1bn for the Department of Education will play out. This figure aims to take per pupil funding up to £4,000 in primary schools and £5,000 in secondary schools.

This basic level of funding needs topping up per pupil, and involves complex formulas and chains of commands running from central government down to the local authority, individual schools and finally specific pupils.

This is all very difficult to achieve in times of relative political peace, but with turmoil dominating, these promises effectively null until Brexit and general elections are out of the way.

Should the funding arrive, and indeed grow like mainstream funding this would be welcome, but, honestly? We shouldn’t cash that cow just yet.